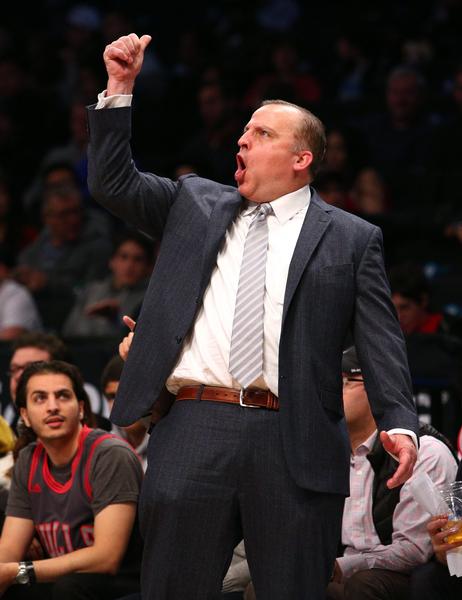 Former Bulls coach Tom Thibodeau probably deserved to be fired.  The strengths of his work ethic, defensive acumen, and player development are largely countered by his poor minutes management and uninspired offensive strategy.  He is one of the most influential coaches in the NBA, but isn’t in its top tier due to his limitations.  I’ve long been a Thibs supporter, and still am, but I can admit this.

The Chicago Bulls fired him today.  It might not be the right move, but from a purely basketball perspective it’s not necessarily a dumb one.  The process is what needs to be measured, not the outcome.  Outcomes can be random.

However, the process is flawed, because the Bulls organization continues to revel in the haughty, arrogant belief that “organizations win championships.”  It shouldn’t come as a surprise; this is the same franchise that was totally OK with letting the best player of all time, one of the best 4 coaches of all time, and two other Hall-of-Fame players just walk.  They thought their “culture” and their “process” and their “organization” was what won them six titles in eight years.  The following eights years proved them very wrong, but clearly no lessons were learned.

Gar Forman and John Paxson have a pretty decent track record when it comes to their chief duties of drafting and player acquisition.  There’s been a few missteps and questionable choices, but by and large their moves in the draft and free agency have been a net positive.  If only the same could be said about the other aspects of their job.

What has occurred today can be considered a debacle.  Not because they fired a good (but not great) coach, but because in the way they fired him.  If there is anyone associated with the league and its players that wasn’t already aware of the Bulls’ front office wankery, they are now.

Jerry Reinsdorf’s aggressive, petty, vindictive press release was meant to throw Thibodeau under the bus.  He wanted to do this because he has escaped rational thought, or because he doesn’t understand that any sane coach would run for the hills before hitching their wagon to Jerry and his cronies.

Their saving grace may be Fred Hoiberg, a reasonably interesting college coach who appears to be the polar opposite of Thibodeau, and also has connections to the Bulls and executive Gar Forman.  If Hoiberg chooses not to leave the college ranks (not an impossibility; he’s had multiple heart surgeries) or goes somewhere else, the Bulls may be in an extremely precarious position.

Alvin Gentry’s name has come up, but he’s on the same coaching staff as Ron Adams (Golden State), who was fired for questioning the front office’s moves in 2012.  I have to imagine Ron’s advice would be akin to “run far away.”

And this sort of position, where everyone now questions your sanity and scruples, was purely avoidable.

But Jerry Reinsdorf, long ago, made this bed.  And he re-made it today, asserting that you will get set on fire and thrown out the window for angering the brain trust.

It’s unprofessional, it’s classless, and it will prevent talent (both of the coaching and playing variety) from feeling good about signing with the Bulls.